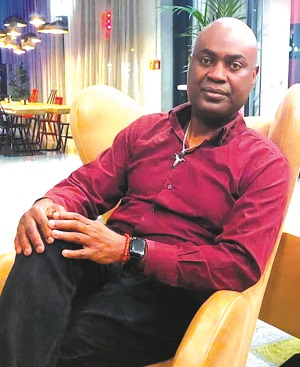 Prince Soji Ehinlanwo was governorship candidate of the defunct Congress for Progressives Citizens (CPC) in Ondo State. The United Kingdom-based information technology and management consultant spoke on why the All Progressives Congress should retain power in Ekiti State. Excerpts:

Why are you interested in the Ekiti governorship election given the fact that you are not from Ekiti, but from Ondo State?

Ekiti State is the neighboring state of Ondo and naturally, Ondo and Ekiti have several interactions and linkages. What affects one of course impacts the other in many ways. On account of this, it is imperative that those of us who are progressive minded from Ondo state continue to support good governance in Ekiti State and join the collective efforts of our compatriots in Ekiti not to allow the state to derail. Also, I spent a significant part of my life in Ekiti state having studied at what was then Ondo State University, Ado-Ekiti and therefore the University and Ekiti State helped to shape me. Consequently, I should be interested in the place that has, in some way, contributed to transforming my life. Finally, I have quite a good number of friends of Ekiti State extraction, and I have no doubt in my mind that on account of this, I should be very interested in the future fortunes of the state. In effect, Ekiti State could be said to be my second home state. So, based on the background which I have clearly given here, I have no doubt in my mind that there are very legitimate reasons for my very avid interest in the next governorship election in the state indeed an anxiety to ensure that we have in place a government after this election that is able to consolidate on the achievements of the JKF administration and take Ekiti State to much greater heights.

Which individual and party do you think is best positioned to advance Ekiti State to those greater heights, which you referred to and why?

I have no doubt in my mind that Biodun Abayomi Oyebanji (BAO) and the APC represent the best choice for Ekiti State and the people, if we are very desirous of lifting Ekiti State much higher and not drawing back the hand of the clock. BAO is the most qualified of the candidates that have presented themselves for this election based on all indices, especially experience, package of ideas, personality, and affinity with the people. Take Experience this is a man who at the young age of 27 was the secretary of the Ekiti State creation committee, helped to draft and has been fully conversant with the vision and plan of development for Ekiti State as set out by the founding fathers of the state. In addition, for over 11 years BAO has served in a number of key government positions in Ekiti helping to craft and implement government policies and gaining considerable insight and experience, which none of the contenders can claim to match. And in respect of the programmes and ideas which have been put forward by the candidates, Biodun Abayomi Oyebanji’s and APC set of programmes and ideas represent the most coherent, realistic, comprehensive, effective and practical for moving Ekiti State forward out of that which have been presented. These programmes, which are segmented around key areas such as infrastructure development and industrialisation, youth development and job creation, aggressive agricultural and rural development, human capital development, active development and promotion of tourism, arts and culture as well as the sustenance of good governance and continued promotion of integrity or “omoluabi ethos” in government clearly articulated and detailed represent the best package of initiatives and ideas presented by any of the candidates to bring significant growth to Ekiti. In addition to his remarkable experience, skills, programmes and ideas, BAO shares an affinity/bond with the people across all the different social levels that is yet unmatched by any of the other candidates and he is incredibly humble. In essence, BAO is the best candidate and one can conclude without any iota of doubt that in BAO and APC lies a convergence of all that is needed at this point to propel Ekiti to much greater heights.

Some have argued that the election will be  hotly contested. In your view, how prepared are candidates Biodun Abayomi Oyebanji (APC), Bisi Kolawole (PDP) and Segun Oni (SDP)?

Based on what I have seen and reports coming from the field, I know that all the three major candidates have been making efforts to reach out to the people. However, it does appear to me that the candidate of the APC  Biodun Abayomi Oyebanji has the biggest and widest field and media presence. He has been taking his campaign to all the nooks and crannies of Ekiti State and it is clear that based on the presence and feedback at those campaign outreaches, he certainly has the most acceptability by the people. His campaigns have been greeted by such enthusiastic and tumultuous response that is yet to be seen in any of the other camps. Even his media presence is overwhelming and consistent. Based on these, it is not difficult to conclude that the APC and the BAO campaign is way ahead of others and seem to be coasting to a very significant victory. Across the length and breadth of Ekiti, BAO is being referred to as the people’s choice and he has had such an overwhelming and enthusiastic reception by the people. I have no doubt that the people will not only give him victory on election day, but are most likely to give him a landslide victory.

Can you give us your views on the structures of the major parties.

Let me be clear it is obvious that the weakest of the party political structures in respect of this impending governorship election is the SDP. In fact, we are not even sure which of the existing factions of that political party is the authentic one. Indeed, one of the key national leaders of the SDP recently disowned both factions. So, one could argue that the candidate of the SDP is even standing on a very faulty foundation. Even in respect of his own faction, there are not viable structures across the state in the local governments and wards. How can such a party even imagine that it has any real chance. On the part of the PDP, it is deeply polarised and has lost considerable following on account of the overbearing inclinations of its “emperor”, which has led to desertion of the party and its candidate by even the remaining leaders within its fold. On the other hand, the APC has found a way to close ranks amongst its leaders, seems to be a more united party and is daily receiving defectors from all the other parties. The structures at the local levels and at the state have become increasingly stronger and it is no wonder that many are already predicting an overwhelming victory for the party at the impending election.

Could you briefly assess the value of each of the parties deputy governorship candidate?

After an initial choice of a deputy governorship candidate who was said to have rejected the position, the PDP eventual choice of Kolapo Kolade is unlikely to bring much to the table other than a feeble attempt to heal deep seated internal grievances within the party. The deputy governorship candidate of the SDP, Otunba Oladipupo Owolabi has little or no political experience and in unlikely to bring much value in terms of votes to boost the outcome for the SDP in the election. However, APC candidate Mrs Monisade Afuye is a well grounded party leader whose strategic choice is expected to bring significant votes from the southern region of Ekiti where she hails. Her choice is also a confidence boosting measure for women across Ekiti and a clear reflection of BAO and APC recognition of women as an important segment contributor to development. Based on field report, women across Ekiti seem to be immensely appreciative of this important gesture and are set to deliver in an overwhelming manner for BAO and APC.